Do we need to insure and ensure every Canadian have essential nutrients?

Do you support a nationalized nutrition education and insurance system?

I believe nutrition, physical and mindfulness training are three self-management perspectives requiring perhaps even more urgent public attention than a national drug plan. For starters, there needs to be greater awareness of the importance of nutrition.  I believe a national nutrition education strategy supported by a essential nutrition insurance plan is more beneficial than even an universal pharmaceutical plan.  What would be the impact of promoting, incentivizing and/or insuring the consumption of one pound of non-starchy vegetables and fruits per day for every adult Canadian.

A recently published WHO/FAO report recommends a minimum of 400g of fruit and vegetables per day (excluding potatoes and other starchy tubers) for the prevention of chronic diseases such as heart disease, cancer, diabetes and obesity, as well as for the prevention and alleviation of several micronutrient deficiencies, especially in less developed countries.
Hippocrates considered nutrition one of the main tools that a doctor can use. More than that, dietary measures play a lead part in the original oath of Hippocrates. In modern translations of the oath, the central importance of diet is often somewhat hidden. English Wikipedia for example turns it into: “I will use treatment to help the sick according to my ability and judgment, but never with a view to injury and wrong-doing.”
But the original Greek oath, literally translated, says: “I will apply dietetic and lifestyle measures to help the sick to my best ability and judgment; I will protect them from harm and injustice.”
The dietetic and lifestyle measures are just one word in Greek, διαιτήμασί (pronounce as “deaytimasy”). You may recognise the word “diet” in there. It means as much as a lifestyle regime, with a focus on diet. Exercise is also part of it. Sometimes it is just translated as: dietetic measures.”

A large Health Maintenance Organization
in the US uses food as a way to treat illness. “Geisinger’s program (paying for patients food) can look like a bargain. Over the course of a year, the company will spend about $1,000 on each Fresh Food Pharmacy patient. The health system tracks hemoglobin A1C levels in the pilot participants, and it is also assessing the number of medical visits and illnesses along with the overall cost of caring for these patients. “A decrease in hemoglobin A1C of 1 point saves us [about] $8,000,” says David Feinberg, the president and CEO of Geisinger Health System.”
In my experience, much of medication prescribed in fact perpetuate the widespread delusion that what the mind wants to eat is more important than what the body needs. Type 2 diabetes is only but one of a multitude of consequences of poor dietary habits. Targeting glucose level with a myriad of prescription drugs so that I can continue to eat what my mind wants and omit what the body needs sets the stage for even more serious health challenges to come. (See below – Nutrition)
What is the responsibility of an insured in an insurance system?
Universal health insurance is fundamentally different from other forms of insurance in that it is not conditional on the behavior of the insured; it may not cover non-essential services but endeavours to cover all other services regardless of claimants behaviour. This is not so with other forms of insurance. Life insurance do not cover suicidal death. Driving while under the influence of drugs or alcohol can cause a claim to be denied. Property insurance company may deny coverage for a house with dangerous wiring or at risk plumbing systems.
I don’t believe denying the sick of healthcare on the basis of behaviour is rational or progressive. With the national healthcare expenditure (public and private ) being $250 Billion on a tax revenue of little over $300 Billion; I also believe the long term success of Universal and/or privatized health care pivots on the collective behaviour of its insured.
Presently Canadians are formally educated by schools and informally, by marketing forces. The above system have collectively resulted in a culture where Approximately four in five Canadian adults have at least one modifiable risk factor for chronic disease (self-reported tobacco smoking, physical inactivity, unhealthy eating and harmful use of alcohol) – (Health Canada)
30 percent of Ontarians are with diabetes or prediabetes.
“Mental health and physical health are fundamentally linked. People living with a serious mental illness are at higher risk of experiencing a wide range of chronic physical conditions. Conversely, people living with chronic physical health conditions experience depression and anxiety at twice the rate of the general population”. – (Canadian Mental Health Association)
65 percent of students reported experiencing overwhelming anxiety in the previous year (up from 57 per cent in 2013)- (University and College Health Association 2016)
“By age 40, about 50% of the population will have or have had a mental illness.” – (CAMH)
In 2016, Canadians’ spending on vegetable is <5% compared to spending on processed food and beverages. ($4.9 vs 102.9 Billions)
I think a nationalized nutrition education program involving collaborations between healthcare system, educators and private corporations is also urgently needed to complement a national nutrition insurance program.
Nutrition:
According to Review article by Aune D, et al. Int J Epidemiol. 2017. Fruit and vegetable intake and the risk of cardiovascular disease, total cancer and all-cause mortality-a systematic review and dose-response meta-analysis of prospective studies.
“Inverse associations were observed between the intake of apples and pears, citrus fruits, green leafy vegetables, cruciferous vegetables, and salads and cardiovascular disease and all-cause mortality, and between the intake of green-yellow vegetables and cruciferous vegetables and total cancer risk. An estimated 5.6 and 7.8 million premature deaths worldwide in 2013 may be attributable to a fruit and vegetable intake below 500 and 800 g/day, respectively, if the observed associations are causal.


Conclusions: Fruit and vegetable intakes were associated with reduced risk of cardiovascular disease, cancer and all-cause mortality. These results support public health recommendations to increase fruit and vegetable intake for the prevention of cardiovascular disease, cancer, and premature mortality.”
at June 19, 2019 No comments:

I think we can create a wellness economy for ourselves, our children and grandchildren…

Fight against food insecurity with edible perennials such as clover

In this study, the elemental distribution and nutritional value of five edible Trifolium species, namely, Trifolium africanum, Trifolium burchellianum, Trifolium repens, Trifolium dubium and Trifolium pratense were investigated to evaluate the potential of these plant species to alleviate malnutrition, thereby contributing toward the fight against food insecurity. 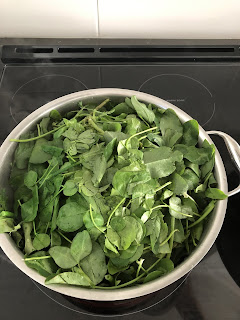 What is happiness, complacency and oneness

I am grateful for my life and my life as a family physician. I tell my patients happiness are transient moments and so are sadness. T...